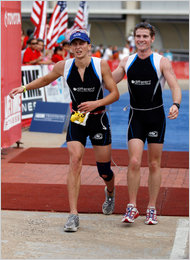 I need a few hours to decompress and think about my race before I do a Hamburg Race Report. If I wrote it right now it would be laced with obscenities and insults that I probably don’t mean. Not that my 41st place is anyone else’s fault. It’s most certainly not, but right now I’m pretty pissed with myself.
In the meantime, take a look at this article in the New York Times! It’s about Aaron Scheidies and the new paratriathlon rule changes for Vision Impaired athletes. I wrote about it a couple months ago, but the NYT is a little more objective, and they included a sweet picture of Aaron and me from 2007. This is the second time I’ve been photographed in the NYT! Awesome!!