I just had an incredible weekend in Los Angeles. It was the final lap of my off-season and I made the most of it. After all the fun Iâ€™ve had over the past 6 weeks, Iâ€™m exhausted! Delightfully exhausted, and really excited to get back into the grind. The trip to SoCal was prompted by Abby getting an interview at UCLA. Basically I was invited along as chauffer and activity coordinator for a weekend of fun. And it was!

Thursday we walked around Venice Beach and fulfilled our desire to smell some salty air and get our feet wet in the ocean. After that we met up with my college buddy Mark Backman for his birthday party in Hermosa Beach.

Friday morning I drove Abby to her interview, hung out at a local espresso bar for a bit, then met up with Peggy McDowell-Cramer, who you may remember as an occasional guest blogger on this site, a 16-time Ironman, and an extraordinary person who I met at

my first Age Group National Championships in Kansas City. She took me to the Westwood pool and we swam together. I was just going to play in the water, but she made me do a real set. In return, I made her finish that set and go faster than she thought she could.

After the swim Peggy made me lunch and we chatted until it was time to pick up Abby from UCLA. From there we checked out Santa Monicaâ€™s Pier, rode the ferris wheel, shopped some, and had a Sushi dinner (these are all things we canâ€™t do well in Colorado). The only part of the day that didnâ€™t rock was the LA traffic, which is terrible.

Saturday Abby and I went to the Getty Villa museum near Malibu. There was a Picasso exhibit that showed his earlier works. It was cool to see how he started drawing classic antiquities, then slowly began to dissect his paintings as he developed cubism. The art, however, was not the reason for going to the Getty Villa. The museum itself is gorgeous!

From there we spent some time at the beach in Malibu, had dinner with Peggy and her husband Pat (I finally got to hear the story of how Peggyâ€™s sailboat sank and she spent 15 hours in San Francisco Bay before being rescued. I wouldnâ€™t be able to do the story justice, but I wish Iâ€™d had a tape recorder so that I could share it with you. Remarkable.)

Saturday night we went to a comedy show at The Improv in West Hollywood. They sat us in front and we ended up being a pretty

big part of the show. The comedian, Ian Bagg,  struck gold, an Olympic rifle shooter, triathlete, the owner of True Religion jeans, Snoopâ€™s agent, and a poor couple on their first date made up the front row of the audience. It was among the funniest standup comedy acts Iâ€™ve seen.

Sunday it poured the entire day in LA. We sat around and watched movies in the morning, then went to an organ concert, which was remarkable. The pipe organ at the Walt Disney center 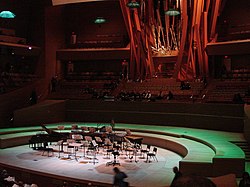 (picture on left) is a piece of art in itself. Plus, I never realized how much work goes into playing an organ. It looks like a serious workout, just the foot solo alone was impressive, but playing four keyboards, and fifth on your feet takes an incredible amount of talent. I was impressed.

Again with Disney, the concert was icing. The real treat was to see the Walt Disney Concert Hall, which is a sculpture by itself. It was a great way to finish a weekend in Los Angeles. Abby and I were both craving some culture after spending so much time in Colorado Springs, and LA delivered.

Now, back to kicking my butt at swimming biking and running. Iâ€™m sick of off-season, time to get faster!